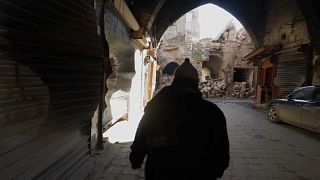 Shops reopen in Aleppo market – or what's left of it

Most of Aleppo's famous historic market is still in ruins more than a year after government forces captured the area from militants, but a few shops are now reopening in a tiny part of the sprawling and once bustling bazaar.

Shop owners and local officials hope that the international community will help renovate this important part of the city, which witnessed some of the worst fighting since Syria's conflict began in March 2011.

Aleppo's old market, or souk, is believed to be one of the oldest covered markets in the world and once was a major business centre throughout the region. Shoppers from around the world used to flock there to buy textiles, clothes, perfumes, spices and handmade oriental products.

The market is part of Aleppo's Old City, a UNESCO world heritage site, that also boasts a 13th-century citadel, a giant mosque, and several other monuments, nearly all of which have been damaged or destroyed.

Along the narrow streets of the market, the damage is still widespread, with alleys blocked with debris, domes knocked, shops with no doors, and mangled metal almost everywhere.

The market still has no water, electricity or telephone lines. At night, thieves come, so business owners have hired a guard to keep an eye on their stores.

Aleppo, Syria's largest city and once commercial centre, witnessed a year of conflict after the country's crisis began.

In July 2012, rebels stormed eastern parts of Aleppo as well as the Old City triggering more than four years of fighting and shelling that widely damaged the area.

Rebuilding the market won't be an easy task and it will likely come with a price tag in millions of dollars.