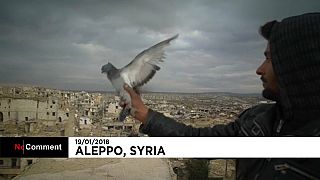 A Syrian soldier serving in Aleppo has an unusual way of spending his downtime - breeding pigeons on the rooftop of a partially-destroyed building.

Bassil, who asked to be identified by his first name only, is a 29-year-old soldier from the eastern Syrian city of Deir el-Zour.

He has been serving as a soldier with the government forces in Aleppo in the north of the country for eight years, and has not seen his parents or siblings in all that time.

In 2016, Bassil witnessed some of the most intense fighting of the civil war as rebel fighters took control of parts of government-held western Aleppo.

In December 2016, the city came under full control of the government after a crushing offensive that forced remaining insurgents to evacuate to the northwestern province of Idlib.

But in the past two years, a scaling down of the fighting in Aleppo has given him the chance to explore his hobby of breeding pigeons.

In a residential area known as Ramouseh, which used to house a major bus station, almost all the buildings have been destroyed.

It was the target of a lightning rebel offensive in August 2016, and was captured from government forces for several days.

On the roof of one building, where the staircase is only partially intact, Bassil keeps his pigeons in a cage.

When he's not required for duty, Bassil climbs up the damaged stairs, squeezes himself through the rubble and metal joists and comes out onto the roof where he spends time with his birds.

He feeds them and admires them as they fly over the destruction down below - buildings riddled with bullet holes or partially collapsed from airstrikes and shelling.

"I climb here to relax and have some good time with the pigeons," he says.

"I am far away from my parents so I spend my spare time with these birds after I finish my shift. I watch them and make them fly."

Almost none of the buildings left in the area are fit for habitation, but Bassil says he is hopeful for the future.

"All parts of Syria should be built. God willing, all this destruction will be rebuilt."