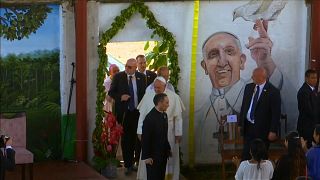 Pope Francis made a forceful call to combat corruption in Peru, calling it a social "virus" a month after the Andean nation's president pardoned a former autocratic leader who had been jailed for graft and human rights abuses.

As Peruvian President Pedro Pablo Kuczynski sat beside him, the pope said that tackling corruption required "a greater culture of transparency among public entities, the private sector and civil society - and I don't exclude Church communities," in some of his most direct words on the theme yet.

While the Argentine pontiff, Latin America's first pope, has condemned corruption on past trips, it is rare for him to mention it alongside a leader, particularly one who has been tainted by scandal like Kuczynski.

Earlier the pope met indigenous people and homeless children in the Amazonian town of Puerto Maldonado before flying with a military escort to Lima.