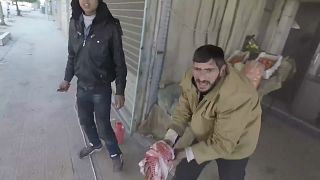 In this footage, rescuers run down a street to the site of a munition explosion, finding three injured people near a vegetable stand. Other footage showed injured people being transported from a residential neighborhood to a local hospital.

The Douma Medical Center said it treated many injured people after strikes on Douma, including six people suffering from suffocation. A man speaking at the medical center said a mortar strike fell at 6pm on January 13 and residents smelled chlorine. These reports of chlorine gas being used cannot be independently verified.

Airstrikes and mortar strikes hit the cities of Erbin and Harasta, also in East Damascus, on January 13.