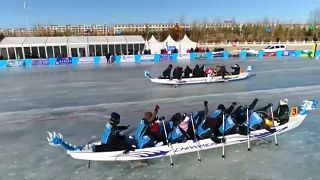 Over 300 participants from 23 countries and regions compete in the three-day championship that features 12-men, five-men and four-men ice dragon boat racing over 100 and 200 meters.

The local temperature dropped to minus 25 degrees Celsius, but it didn't dampen the enthusiasm of either participants or spectators. Ice dragon boats are equipped with drums which help to keep the tempo of rowing for team members in competitions. They have ice blades on the bottom, and apart from paddles, there are also sticks with spike-laden horsehoofs used on the ice surface.

A braking system is installed at the stern, so that a helmsman could stop the boat on time if needed.