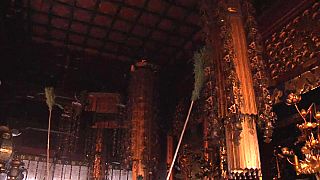 Monks at Zenkoji temple in Nagano City, central Japan, are brushing off the dust accumulated throughout the year in a traditional ritual.

About 40 people including monks and temple officials began the annual year-end cleaning on Thursday (December 29) morning.

The winter house cleaning is one of the rare occasions when officials open the room housing the temple's hibutsu - or principal image of the Buddha.

Monks in white costumes carefully cleaned the room, starting by removing Buddhist altar fittings from the main hall. Then they dusted lights and ornaments hanging from the ceiling, using 5-metre-long bamboo branches.

They also beat tatami mats with wooden sticks to loosen the dust before vacuuming.