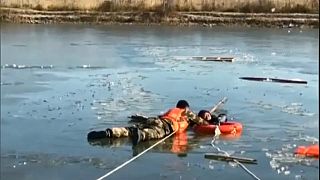 With temperatures close to -10 degrees Celsius, firefighters rushed to the scene.

By the time they arrived, he had been immersed in the chilly water for half an hour, and was too numb to catch hold of the rope being thrown to him.

With the clock ticking, firefighter Guo Song decided to crawl across the ice. Guo lay down, slid up to the edge of the ice hole and took the rope directly to the victim.

But firefighters still struggled to drag the victim back to shore.

Finally, fireman Wang Hao tied a rope around himself and crawled across the ice and grabbed hold of the victim.

The rescuers then used a rubber dinghy to carry both men back to the bank. The victim was immediately sent to hospital.