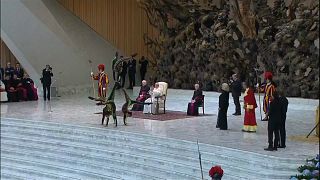 Baby, it's cold outside - but that didn't keep some of the world's most dedicated winter swimmers away from a competition in Jiagedaqi District in China's Heilongjiang Province.

On Monday (December 25), the temperature dropped to minus 29 degrees Celsius, but it didn't phase the swimmers one bit.

"The water here is extremely cold and biting. We pushed ourselves to the limit. We will definitely take part in next year's competition!" said Liu Yafu, a Chinese winter swimmer.

"We came from Russia to take part in the competition in Jiagedaqi. We really like it here, although it's very cold, but the people here are very nice, which is great," said another swimmer.

More than 500 swimmers and 72 teams from around the world took part in the event in the Greater Khingan Mountainous Area.

The competition has three events - freestyle, breastroke and relay - and swimmers - who ranged in age from 15 to 76 - are divided into three groups, according to their ages.

Teams from China, Russia, the U.S. and the U.K. also gave diving performances during the competition.