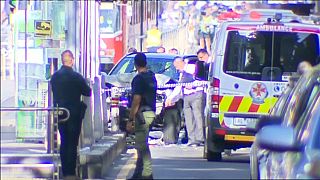 Two people arrested after a car drives into pedestrians in Melbourne

Two people have been arrested after a car was driven into a crowd of pedestrians in Melbourne.

Police in Australia's second largest city have not given any possible motive for the incident that left as many as fifteen people injured. The Victoria State ambulance service say thirteen people have been taken to hospital, including a pre-school child with a head injury.

The attack took place during a busy time in Melbourne with its major streets packed with holiday shoppers.

It follows a similar incident that took place in January when four people were killed and more than 20 injured, when it drove into pedestrians at a spot just a few hundred metres away from Thursday's attack.