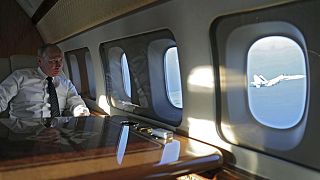 Vladimir Putin on Monday (December 11) visited a Russian military air base in Syria after declaring a victory against the so-called Islamic State in the country.

The Russian president also announced a partial pullout of Russian forces from the Middle-eastern nation prior to his appearance.

It is Putin's first trip to Syria and the first visit to the war-torn country by a foreign head of state since the conflict began.

He was greeted by Syrian President Bashar al-Assad at the Russian Hmeimim airbase in the coastal province of Latakia.

“Friends, the motherland is waiting for you,” Putin told the Russian air force detachment. “You are coming back home with victory.”