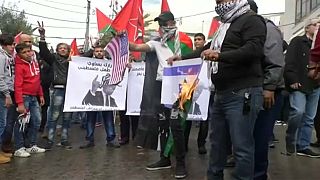 Lebanese security forces fired tear gas and water cannons at protesters near the U.S. Embassy in Lebanon on Sunday during a demonstration against President Donald Trump's decision to recognise Jerusalem as the capital of Israel.

Protesters, some of them waving Palestinian flags, set fires in the street and threw projectiles toward security forces who had barricaded the main road to the U.S. Embassy in the Awkar area north of Beirut.

Trump's recognition of Jerusalem has infuriated the Arab world and upset Western allies, who say it is a blow to peace efforts and risks causing further unrest in the Middle East.