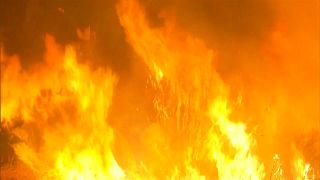 A rapidly growing wildfire is threatening hundreds of homes north of Los Angeles.

The flames have forced residents to evacuate after causing at least one death and power cuts throughout the area, according to officials.

Some 1,000 households in Ventura County, about 115 kilometres northwest of Los Angeles, were told to leave as the 10,000-acre wildfire, known as the Thomas Fire, burned dry brush after erupting earlier in the evening.

One motorist was killed fleeing the fire, the Ventura County Fire Chief, Mark Lorenzen said at a news conference. More than 150,000 homes were without power on Tuesday and at least two structures were destroyed, local media said.

Strong winds were pushing the fire toward the cities of Santa Paula and Ventura, where about 140,000 people live.