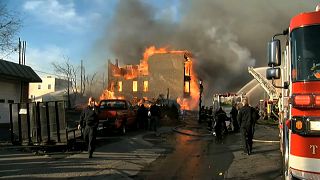 A fire has gutted nearly two dozen buildings in the US city of Cohoes in upstate New York.

The blaze is believed to have been sparked by an amateur bladesmith who was trying to imitate something he saw on TV, officials said.

Mayor Shawn Morse said John Gomes, of Cohoes, was apparently trying to bend metal in an attempt to imitate the History Channel television series "Forged in Fire" when he started a barrel fire in his backyard which quickly spread.

The TV series is about bladesmiths competing to create "history's most iconic edged weapons."

Gomes, 51, has been charged with reckless endangerment and misdemeanor arson.

Three buildings were destroyed in the inferno and 18 others damaged.