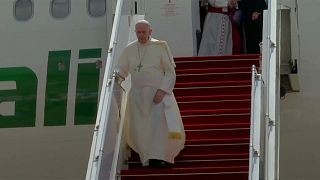 Pope Francis has arrived in Myanmar where discussions are likely to focus on the plight of more than 600,000 Rohingya Muslims displaced by violence in Rakhine state.

It follows worsening violence there that the UN has described as ethnic cleansing by police and the military in the Buddhist majority country.

It is the Pope’s first visit the country where he will meet with de facto leader Aung San Suu Kyi, as well as the army chief.

From Myanmar Pope Francis will head to Bangladesh where the hundreds of thousands of Rohingya refugees have fled to. He is also expected to meet a small group of them there.

The Pope will need to avoid using the term “Rohingya” though as the authorities in Myanmar consider it to be politically charged.

Just over one per cent of Myanmar’s population are Catholic and, over the weekend, dozens of Catholic devotees camped out at Churches in Yangon with many having taken a 48-hour train journey from Kachin State.

When Pope Francis visits Bangladesh he will be the first to do so in more than 30 years. He heads there on Thursday.