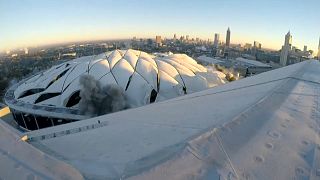 It was a case of wrong place, wrong time for one American TV producer who set up his camera to film the demolition of the Georgia Dome.

The Whether Channel, like other media outlets, decided to organise a livestream of the event.

But with only seconds to spare before the 80,000-seat stadium was reduced to rubble, a big commuter bus pulled up right in front of the TV producers shot.

During the filming a man can be heard shouting, “No bus! Go away!”, followed by cursing as the Dome implodes.

More than 2000kg of explosives were used to destroy the facility, host to both the Olympics and Super Bowl.