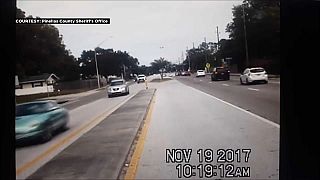 A small plane crashed on a highway around half a mile from Clearwater Airpark in Pinellas County, west Florida, on the morning of Sunday, November 19.

The crash on North Keene Road, Clearwater, was captured on the dashcams of two deputies from the Pinellas County Sheriff’s Office who were in the area on an unrelated call.

The plane clipped a tree as the 61-year-old pilot tried to make an emergency landing after experiencing engine trouble on the return journey from Zephyrhills Municipal Airport.

The pilot, Marc Benedict, and his passenger were not injured in the crash, according to the sheriff’s department.