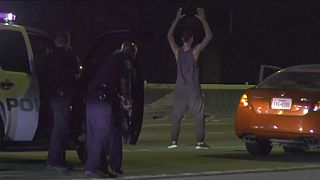 A man who led police on a nearly 20-mile chase through Houston was taken into custody only after dancing once he stepped out of his car.

The unidentified suspect came to a stop early Thursday before striking spike strips police had laid across Interstate 45.

He eventually complied with police orders to step out of his car but rather than lay on the ground the man began a dance with arms held high.

The episode concluded when a police dog attacked him. Police Lt. Larry Crowson said officers were concerned the man might try to flee into traffic, so they unleashed the dog.

Crowson said investigators will determine whether the man was under the influence. The suspect was charged with evading arrest, but it could easily have had a worse outcome.