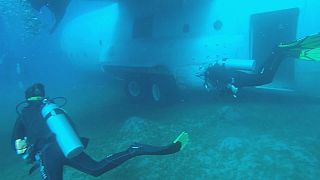 The Aqaba Special Economic Zone Authority and the Harbor authorities have submerged the hull of a decommissioned Royal Jordanian Airforce C-130 Hercules warplane in the Gulf of Aqaba.

The plane was transferred nearly one month ago from an airforce location to a harbour facility.

Prince Hamzah Bin al-Hussein, hundreds of Jordanians and tourists gathered at the beach to watch the sinking of the warplane.

“I think that this will encourage a lot of tourists to come here. A lot of great diving sites already, to have a plane, is very very good I think,” said a Danish tourist.

The plane was surbmerged to create new tourism marketing content for Aqaba. Nasser Sheaideh, Chief Commissioner of Aqaba Special Economic Zone Authority said “the iron structure of the plane inside the sea would be a shelter for marine organisms.”

It will also be manna for the local economy says local diver Fares Abu-Mahfouth:

“In Aqaba, we have many locations for diving, there is the location of the ship, and also the two tanks, which were submerged by the King. Creating this location for the structure of the plane, God willing, would encourage tourism, and would encourage tourists from outside to come here. Of course, the coral reefs will grow there, and it will be a shelter for small fishes too. This new diving location would be a great experience for adventurers and divers.”