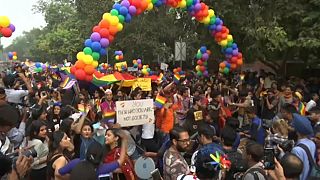 Hundreds of gay rights activists and supporters have paraded through the streets during New Delhi’s 10th annual Queer Pride march.

The parade through India’s capital was a celebration of gay pride, but also a sign of defiance in a nation that continues to outlaw homosexuality.

Many wore colorful costumes and held balloons, chanting and dancing as they walked through the streets.

Many said they were frustrated with Section 377 of the Indian Penal Code, which criminalises homosexual acts, but also hoped it would soon change.

“The idea of having section 377 in India is irrelevant to my head. I don’t understand why they (authorities) criminalise love. Duh, they are jerks,” said one man.

Manak Matiyani, one of the organisers, said they were fighting for equality and the right of every Indian to live the way they choose.

“We are fighting for the right of everybody in this country, to live as an equal citizen, which means that everybody should be able to live their life the way they want to, have relationships of the kind that they want, without any threat of you know, being made criminal by the law or by anybody else.”

Indian law makes gay sex punishable by up to 10 years in prison.