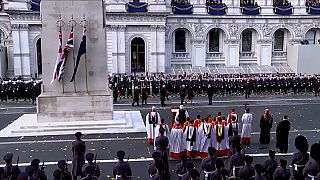 The 91-year-old queen watched the service at London’s Cenotaph memorial from a balcony alongside her 96-year-old husband Prince Philip.

The monarch, who is reducing her public duties after 65 years on the throne, had asked her son to lay a wreath of poppies on her behalf.

Britain’s political leaders and dignitaries from the Commonwealth also attended the ceremony in central London, laying wreaths on the Portland stone monument inscribed with the words “the glorious dead.”

Thousands of military personnel, veterans and members of the public gathered on a cold, sunny day to honour those killed in World War I and subsequent conflicts.