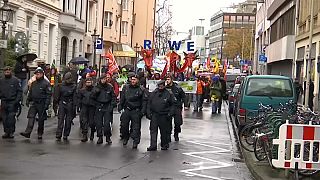 Protests continue as the COP 23 talks grind on in Bonn

Around 2,000 demonstrators gathered in the streets of Bonn on Saturday, (November 11), hoping to send a message to delegates meeting at the United Nations climate talks.

Wearing colourful costumes and sitting on floats, the activists paid tribute not just to the environment but the first day of Germany’s traditional Carnival celebrations.

While progress is slow in #cop23#climate negotiations, outside people are demanding #climatejustice and #endcoal in #Bonn march lead by Carnivale ghost ship. Time to #StopAdanipic.twitter.com/YHXahMVN6L

“Climate change is pretty much not up for discussion. There is not enough attention. We now have the climate conference and we must bring some attention, that is urgently necessary. We’re doing it in a carnival kind of way,” said one young man.

“I hope that given the current noticeable global weather change, that the summit gives a yank and that it doesn’t just remain with empty words. This is of course a very vague hope, but with Fiji officials really pushing perhaps this will be very close to being not just talk but everyday experience,” said another German protester.

#ClimateChange is the biggest global #health threat and the biggest opportunity for #PublicHealthTheLancet</a> <a href="https://twitter.com/WHO?ref_src=twsrc%5Etfw">WHO#BonnFiji#Medicinepic.twitter.com/Yyvz7SWyJZ

“I don’t have any big expectations. I actually don’t think that anything will come out of it, like last year or the year before. No expectations. That’s also why I’m here because I think that the people have to take it into their own hands if something is to happen at all.”

The negotiations in Bonn, to write a rulebook for the 2015 Paris climate agreement, have been overshadowed by what to do after President Donald Trump decided in June to withdraw the U.S. from the pact, instead preferring to promote coal and oil.

Fiji, presiding over the summit known as COP23 as president, is the first small island state to preside at U.N. climate negotiations since they began in the 1990s.