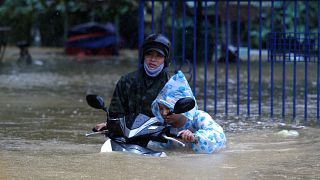 The streets of UNESCO heritage town Hoi An were flooded on Monday (November 6) after a powerful typhoon hit Vietnam over the weekend.

Residents made their way around the inundated ancient streets on boats as heavy rain continued.

The country is due to host the Asia-Pacific Economic Cooperation (APEC) summit despite the adverse weather and organizers have said the schedule will not be disrupted. Danang will host US President Donald Trump from November 10, as well as China’s President Xi Jinping, Russia’s President Vladimir Putin and counterparts from other APEC members.

Floods killed more than 80 people in northern Vietnam last month, while a typhoon wreaked havoc in central provinces in September. The country of more than 90 million people is prone to destructive storms and flooding due to its long coastline.