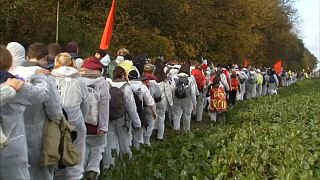 Activists enter the grounds of a brown coal mine near Bonn

A day before environment ministers from around the world gather in the German city of Bonn for United Nations talks on how to implement the Paris climate accord, hundreds of activists on Sunday (November 5) marched towards a brown coal mine close to the town of Buir, in North-Rhine Westphalia, and entered the grounds after running past police.

The protest, only 50 kilometres away from where the COP23 climate conference will be held, was a call to end coal production in Germany, one of the sticking points in coalition negotiations between German Chancellor Angela Merkel and her would-be allies: the Greens and the pro-business Free Democrats (FDP).

Coal accounts for almost a quarter of Europe’s power supply.

Most of Europe’s 280 coal power plants are over 30 years old, and many of them are out-of-date in terms of efficiency and pollution standards, and protesters demand the closure of all brown coal power stations by 2030.

Government experts are to work on a “rule book” for the 2015 climate pact at the annual meeting in Bonn. The accord seeks to end the fossil fuel era this century with a shift to wind, solar and other clean energies.