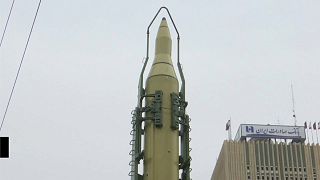 Huge protests have been taking place in Iran to demonstrate against the United States.

Saturday marked the anniversary of the takeover of the U.S. Embassy in Tehran in 1979.

A large surface-to-surface ballistic missile was displayed on the site of the former embassy where thousands of people gathered to display banners and shout slogans.

Relations between Iran and the U.S. have worsened under the Trump administration amid uncertainty over the nuclear agreement with other major world powers.

Iran has defied President Trump’s hard line stance on the country by parading its missile capability.

But Trump claims that Iran’s development of ballistic missile is contrary to the spirit of the 2015 agreement.