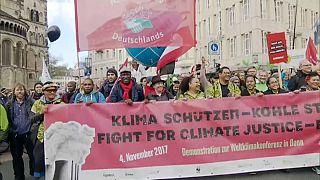 German protesters out to influence COP 23

About 7000 people protested on Saturday for better protection of the climate 2 days ahead of the COP23 conference in Bonn.

Protesters come from different countries, such as The Netherlands and France. They demanded a faster exit from energy production by coal. The protests come ahead of the COP23 meeting which starts on Monday and is set to implement the Paris climate accord.

Germany has never before hosted an intergovernmental conference this size. Twenty-five thousand people are expected to attend the UN Climate Change Conference in Bonn. The city is preparing for the onslaught. The logistics have been far from simple.

Bonn has become a life-size street theatre for demonstrators in the streets carrying banners in German, saying slogans like: Planet Earth First, Protect the climate, Fight for Climate Justice, Stop coal, Save the climate, Climate Justice, Move out of the way for the new energy generation, and Sylt goes under too much coal.

Small preview of the cultural performances that will be on show in Bonn at #COP23. #Lalidrumming#Uniting4climatepic.twitter.com/9xKwLQWOGs