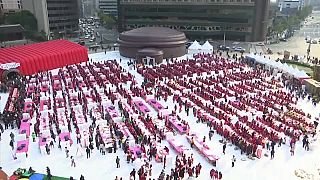 Kimchi Festival kicks off in Seoul

More than 2,300 people including 400 foreigners gathered at the 4th Seoul Kimchi Festival on Friday to make the classic Korean fermented spicy cabbage, for charity.

About 60 tons of kimchi, which is made with salted cabbage doused in a spicy chilli paste, and flavoured with garlic, ginger, fish sauce and fermented seafood, were prepared during the event organized by Seoul City.

Organisers said they are aiming to make a total of 120 tonnes of kimchi to distribute to the poor around 25 Seoul districts.

South Koreans consumed about 1.85 million tonnes of kimchi in 2016, according to the World Institute of Kimchi.

United Nations Educational, Scientific and Cultural Organization added the making and sharing of kimchi to its Intangible Cultural Heritage list in 2013