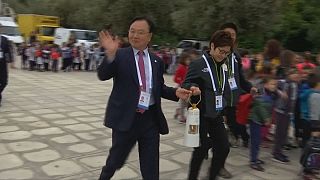 Thousands gathered in Athens’ ancient Greek Panathenaic stadium on Tuesday, (October 31), home of the first modern Olympics in 1896, to watch Greece hand over the Olympic flame to the Pyeongchang 2018 winter Olympics organisers.

The torch was run into the stadium by Korean speed skating gold medallist Kim Ki-hoon, following its week-long journey around Greece after the flame was lit in ancient Olympia.

Hellenic Olympic Committee President Spyros Kapralos said the flame was a symbol of peace, unity, and friendship, and hoped that message would be passed to the rest of the world. The flame was then placed in a lantern and handed over to Pyeongchang 2018 organisers.

“I think its always important when we have Olympic games, and this time its in Korea. I think they have made good preparations and the games will be a big success. Today we are handing over the flame, and this flame is a symbol of peace, unity, and friendship, and we hope that all this will prevail and will pass the message to the rest of the world,” he said.

Following Tuesday’s handover in Athens, the flame will be flown in special safety lanterns to Switzerland for a ceremony at the United Nations in Geneva.