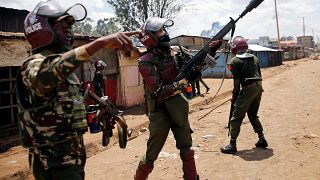 A fire erupted amid the unrest and destroyed hundreds of businesses. Homes shops were looted by men wielding sticks and machetes.

It all started with a rumour: the Mungiki, a dreaded Kikuyu tribal militia, infiltrated Nairobi’s Kawangware slum. Within minutes, local men – already fired up by Kenya’s divisive election – had grabbed machetes and sticks to defend their turf. The Kikuyu is the tribe of Kenyan President Uhuru Kenyatta.

The Mungiki, notorious for castrating and decapitating victims, were blamed for hundreds of deaths in the 2007 clashes. Their relative quiet since has not diminished their reputation.

The deeper fear of Kenyans is that the months of political strife, exacerbated by the courts annulling the August vote, eat away at deep tribal divisions and ignite a wave of inter-ethnic violence, as happened after a disputed 2007 vote when 1,200 people were killed.