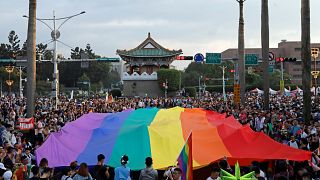 Members of the LGBT community from across Asia flocked to Taipei to attend an annual Pride parade on Saturday (October 28).

Taiwan’s LGBT Pride commonly attracts tens of thousands of participants each year and is seen as one of the biggest such parades in the region. The first parade was held in 2003 and the number of participants has continually been estimated to top 60,000 in recent years.

With extravagant costumes and rainbow flags, the parade is fun but LGBT rights issues were also in the minds of many especially after Taiwan’s high court ruled in favour of legalising same-sex marriages this May. The court declared current marriage laws to be unconstitutional and put a time limit of two years on efforts to legalise same-sex marriages.

Participants said they felt there was still much to be done before true gender and marriage equality could be reached in Taiwan.