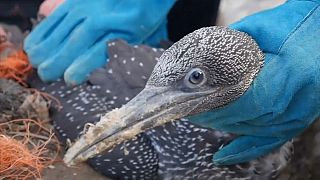 Updated: 20/10/2017
<p>Grassholm, an island around 13 km off the coast of Wales, is home to one of the world’s largest Gannet bird colonies.</p> <p>It’s also strewn with plastic, in which young birds get ensnared.</p> <p>The birds find the plastic ropes and fishing gear floating in the water, and bring them back on shore to build their nests.</p> <p>Conservationists at the Royal Society for the Protection of Birds (<span class="caps">RSPB</span>) say there’s now too much plastic to clean up. This could prove disruptive to the island’s colony of around 36,000 pairs of breeding gannets, which return to the same nest every year.</p> <p>Instead, they do what they can to free entangled birds.</p> <p>For some, they have come too late.</p> <p>“It’s such a shame that we can’t get to these any earlier, but when the colony is busy, to walk across like this would just cause too much disturbance, so,” says <span class="caps">RSPB</span> warden Lisa Morgan.</p> <p>Over the 12 years conservationists have been visiting the island, they’ve cut free 637 birds.</p> <p>“I mean, this is all out of sight, out of mind – people would have no idea this is coursing through our seas,” says <span class="caps">RSPB</span> warden Greg Morgan.</p> <p>“You go back each year, it makes you more determined to try to do something about it.”</p>
no comment