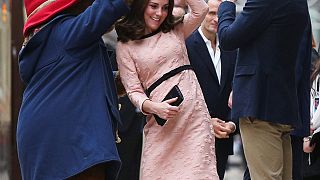 Paddington Bear works his magic on the Duchess of Cambridge

The Duchess of Cambridge had an impromptu dance with Paddington Bear on Monday afternoon to sounds of a calypso band playing at Paddington Station in London. The royal was attending an event with Prince William, Duke of Cambridge and Prince Harry, held for the young beneficiaries of their Charities Forum. As part of the celebrations, guests got to spend the afternoon on a Belmond British Pullman steam train – which features in the upcoming sequel “Paddington 2.”

Actor Hugh Bonneville, who reprises his role of Henry Brown in the new film, was also in attendance. The actor, also a star of “Downton Abbey,” said it was “a great opportunity” to promote the “Paddington 2” movie and the royals’ charities.

“It’s a wonderful way to celebrate more than, I think more than 10 or 12 charities that the Royal Highnesses are supporting and for us to be able say Paddington is on his way again. So it’s a great opportunity,” Bonneville said, adding, “And also I get to eat marmalade sandwiches on the train.”

Prince William said he was doing his best to ensure his son would get just the right amount of film fun: “He tends to watch quite a lot of things, he has watched some Lego movies as well. Yes, he’s watched a lot of things like that. Trying to keep him off the television is hard work. Not too much TV,” he said. His brother Prince Harry then got into a conversation with a young Paddington fan.

“What’s that? What is this?” he asked seeing the child playing with a toy.

“A fidget spinner,” was the reply.

Prince Harry: “What’s it for? fidgeting. I like that. I need to get myself one of those.”

After meeting with some more of the young passengers on the train, the royals returned to the platform where the pregnant Duchess was enticed into a quick dance with Paddington Bear before the train departed on its journey. “Paddington 2” is released in the U.K. on the 10 November 2017.