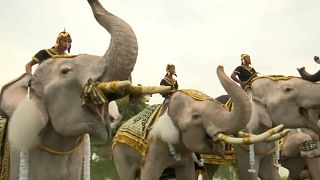 Mourners in the ancient Thai capital of Ayutthaya enlisted a herd of elephants to help them mark the anniversary of the death of revered King Bhumibhol Adulyadej, on Friday (October 13).

Eleven animals from a local camp trumpeted and reared on their back legs as hundreds of black-clad mourners sang the Thai royal anthem, against a backdrop of the city’s temples.

The elephants had been covered in powder to make them resemble auspicious “white elephants” which have a long association with Thai royalty.
King Bhumibhol died a year ago after a 70-year reign and was widely revered.

His son, King Vajiralongkorn, succeeded him.
Thais have marked the anniversary with prayers, merit-making and an 89 second silence, at the moment he passed away.