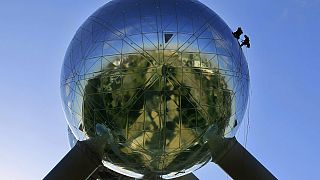 Updated: 04/10/2017
<p>Dangling from ropes as they straddle giant silver spheres that reflect the city below, a team of cleaners began the annual clean-up of Brussels’ iconic Atomium.</p> <p>Getting ready to celebrate its 60th birthday next year, the celebrated structure consists of nine polished steel globes, each 18 metres in diameter connected by tubular passageways, and represents a crystal of iron. But it has also come to be the symbol of the Belgian and European Union capital.</p> <p>The climbers’ team leader, Olivier Delecosse, said he was proud to clean the 100-metre high exhibition space, which was built for the World’s Fair of 1958.</p> <p>Delecosse and his four colleagues will spend the next two weeks on the job.</p> <p>The team polish from the top to the underside of each sphere in turn. </p> <p>The process usually takes place in summer as the cleaning product cannot be used in the rain. However, the crew are optimistic for a good dry run in often damp Brussels.</p>
no comment