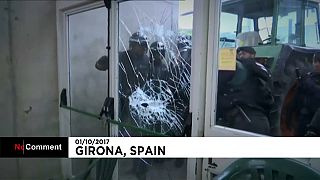 Updated: 01/10/2017
<p>Several hundred people, including a small number of police officers, have been hurt in scuffles between riot police and demonstrators backing Catalonia’s independence referendum.</p> <p>The clashes began as law enforcement agencies tried to confiscate ballot boxes and voting slips.</p> <p>Madrid blamed regional authorities for creating the situation that led to the violence by pushing ahead with a vote the national government says is illegal.</p> <p>Catalan political figures have condemned the Spanish government for excessive and unnecessary use of force.</p> <p>You can see more on the story on our <a href="http://www.euronews.com/2017/10/01/high-tension-as-catalonia-referendum-day-begins">live updates</a> page.</p>
no comment