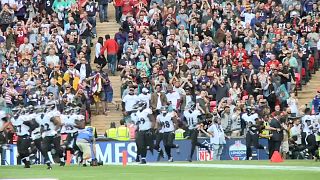 Updated: 25/09/2017
<p>Around two dozen <span class="caps">NFL</span> players went down on one knee at Wembley Stadium on Sunday during the playing of the US national anthem in an apparent act of defiance against US President Donald Trump.</p> <p>At least seven Baltimore Ravens players and more than a dozen Jacksonville Jaguars players kneeled during the anthem before the start of the teams’ game while the rest of the players stood locked arm-in-arm in response to Trump’s comments that <span class="caps">NFL</span> owners should fire those who protest during the national anthem.</p> <p>In contrast to Trump’s suggestion, the Ravens issued a statement from owner Steve Bisciotti minutes after kickoff, saying “We recognize our players’ influence. We respect their demonstration and support them 100 percent. All voices need to be heard. That’s democracy in its highest form.”</p>
no comment