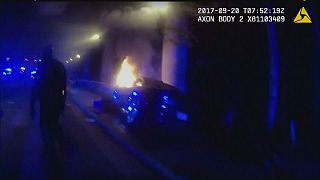 Updated: 23/09/2017
<p>Five US police officers in Atlanta, Georgia, are being hailed at heroes after rescuing two men trapped in a burning car, <a href="http://www.wsbtv.com/news/local/atlanta/video-officers-hailed-as-heroes-for-rescuing-people-trapped-inside-burning-car/612565489">local television channel <span class="caps">WSB</span></a> reported.</p> <p>Footage from the officers’ body cameras show them attacking the fire with their extinguishers, smashing the car’s windows with their batons and trying to help the occupants get out.</p> <p>“We were so close to the fire we didn’t event think about how hot it was or our safety,” said Atlanta Police Department officer Andre Valentine.</p> <p>“Our main goal at the time was to get those guys out,” said officer Derek Daniel.</p> <p>Firefighters managed to bring the blaze under control and to pull the driver and passenger from the car. They were taken to hospital in serious condition. </p> <p><iframe src="https://www.facebook.com/plugins/post.php?href=https%3A%2F%2Fwww.facebook.com%2FAtlantaPoliceDpt%2Fposts%2F1654180874592768&width=500" width="500" height="742" style="border:none;overflow:hidden" scrolling="no" frameborder="0" allowTransparency="true"></iframe></p>
no comment