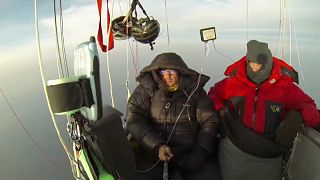 Vincent Leys and Christophe Houver have won the Gordon Bennett Cup, the world’s oldest and most prestigious gas-balloon race in the world.

The annual event attracts the best gas-balloon pilots in the world, the purpose being to take off and fly as far as they can, traveling through the night and crossing international borders.

Leys and Houver were the only team that managed to navigate through a thin corridor of airspace between Kaliningrad and Belarus, which allowed them to fly northeast across Lithuania and Latvia.

Taking off from Freiburg in Germany, they eventually landed 1,834.72km away in Estonia before the Russian border.