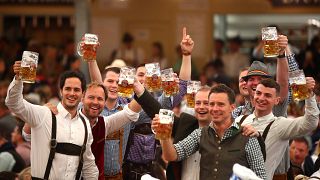 Always held on the second day of the world’s largest beer festival, the parade is a chance for Bavarians to show off their best traditional costume, or what’s known in German as tracht.

There were medieval costumes and more embellishments from days of old. As is the custom, men wore lederhosen, or leather trousers, which are either short- or knee-length, often with a checkered shirt, high woolly socks and a hat with a feather, sometimes known as a Tyrolean or Alpine hat, from where it originated.

Women wear dirndl dresses, characterised by their bright colours and fine detailing, as well as a lace-up front and apron. Traditionally if the apron bow is tied to the left, it means a lady is single, but on the right means she’s taken (middle might mean she’s a virgin or simply undecided).

Brass bands and drummers in vibrantly coloured outfits added upbeat oombah, while a falcon, horse-drawn carriage carrying fresh kegs and a dead stag in a wagon also went past.

The parade also featured the traditional personification of the Munich Child, a monk portrayed on the Munich coat of arms in a black robe with a pointed hood.

The 184th edition of the Munich Oktoberfest ends on October 3.