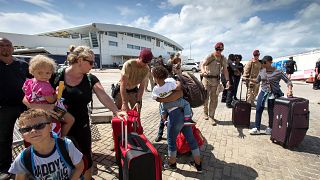 Updated: 12/09/2017
<p>The French president, Emmanuel Macron, has been visiting the French territories struck by Hurricane Irma last week. </p> <p>As he arrived in Pointe-a-Pitre, in Guadeloupe, he promised to put in place “emergency measures” for people living on the islands of Saint-Martin and Saint-Barthélemy. President Macron insisted that the “return to normal life” was an “absolute priority.”</p> <p>The hurricane hit the islands at category 5 last week, killing 11 people on the French side of Saint-Martin and destroying schools and businesses. </p> <p>French authorities are continuing to evacuate the most vulnerable residents of the Caribbean island and aid is continuing to make its way to the region, from the Dutch and French governments, other countries and private organisations. </p> <p>President Macron rejected criticism of his government’s management of the disaster saying the French authorities were prepared in advance and they could not have done more. </p> <p>Both France and the Netherlands have sent aid as well as additional police and emergency response teams to the island.</p>
no comment