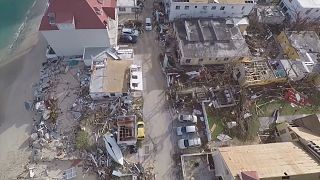 The French authorities continued the evacuation of the most vulnerable residents of the Caribbean island of Saint Martin on Monday, (September 11), on the eve of a visit by President Emmanuel Macron to French territories struck by Hurricane Irma last week.

Macron was due on Tuesday to meet residents and rescuers after the category 5 storm smashed through the island and neighbouring Saint Barthelemy, going on to kill almost 40 people across the region. Rescuers struggled to ferry the most vulnerable off the island to nearby Guadeloupe whose infrastructure was spared by the storm.

Pregnant women, the injured and the elderly were being evacuated in priority, the authorities said.

Residents on the island shared by Dutch St. Martin and French St. Martin are struggling with desperate conditions. Help is making it to the island, from the Dutch and French governments, other nations and private organisations. A French military ship with supplies was due to arrive on Tuesday, coinciding with Macron’s visit.

Hundreds of tourists were also still trying to leave the island, with dozens lining up outside the Princess Juliana Airport. Amid a widespread power outage, many were struggling to maintain a semblance of the life they had before Irma as they fought off hunger and thirst.