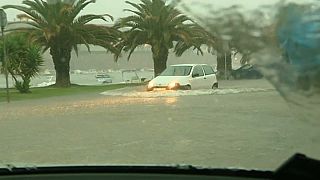 Hospitals and houses have been flooded in Croatia following torrential rain in the Istrin peninsula.

Meteorologists say it is the most significant rainfall in the region for more than 30 years.

Officials in the city of Zadar are urging people not to drive and schools have been forced to close. One river bridge has been destroyed by the waters.

It comes after heavy rain in Italy over the weekend killed at least six people and left two missing.