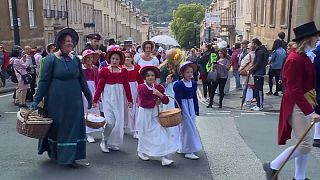 Anyone visiting the English city of Bath on Saturday would have been forgiven for thinking they had stepped back in time to the 18th century.

More than 600 people paraded around the city in Georgian-era costumes, as befitting of a novel by one of Britain’s most famous novelists, Jane Austen, who the city honours annually with a grand event. This is the 17th edition of the Jane Austen Festival.

Great question from a true Bathonian who cares about the city pic.twitter.com/bfCCUqDWyS

Taking part in the parade was Monika Mai from Hamburg in Germany:

“We just really like Jane Austen’s work. There is so much wisdom and intelligence in these books, which make her very modern. Every time you pick up her books you think it is incredible that this is 200 years old. And there are places or situations where a Jane Austen reference comes to mind, and you think: ‘I can’t believe she wrote that 200 years ago’. And on top of that it is so incredibly British. If you want to understand Brexit, then you need to have read Jane Austen.”

Austen Undone is a huge success! An hilarious performance with an exciting difference On today Sun #JaneAustenFestival#visitbath#theatrepic.twitter.com/RnUkYkt709

“We have nine days of all sorts of events. It starts off with this promenade. We have talks on Jane Austen, talks on the history of the regency period, we have dances workshops, balls, readings, theatrical productions. There’s so much. There’s something for everyone at this festival,” said volunteer parade organiser Charlotte Crumper.

People came from around the world to join the parade, which marked the start of the Jane Austen Festival. But there wasn’t wet shirt in sight.

“I’ve known Jane Austen’s writing for many years, and it’s the second time we’ve been here, because we like a lot the themes of her work. We’ve read all of her books and watched all of the films that have been made about her. And to us she’s a fantastic writer, the style of her writing, what she wanted to transmit, her critique of society, the role that women should have. These are the main reasons why we wanted to visit,” said Yolanda from Spain.

I hope all my fellow #Janeites enjoying their time celebrating #JaneAusten at JaneAustenBath</a> and <a href="https://twitter.com/janeaustenfest">janeaustenfest! I wish I were there! pic.twitter.com/L9sIX9fGrM