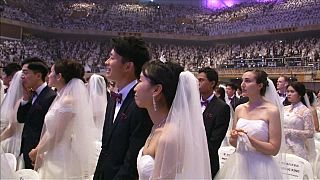 Unification church couples over the moon at mass wedding

About 4,000 couples from 64 countries exchanged wedding vows in South Korea on Thursday, (September 7), in a mass wedding ceremony conducted by the Unification Church founded by late Reverend Sun Myung Moon.

A further 20,000 couples worldwide participated in the ceremony via the Internet, the Unification Church said.

The founder’s widow, Hak Ja Han Moon, officiated at Thursday’s ceremony, which was witnessed by about 30,000 church followers and guests gathered at the church’s Cheong Shim Peace World Center in Gapyeong, about 75 km, (50 miles), northeast of Seoul. Moon, who died in 2012 at the age of 92, had presided over mass weddings since the early 1960s.

Moon was a lightning rod for controversy and was once jailed in the United States for tax evasion. He also declared in 1992 that he and his wife were messiahs. Critics over the years have called the organization a cult, questioning its finances and how it indoctrinates followers, who are sometimes derogatorily known as “Moonies.”