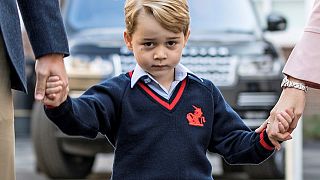 British royal Prince George, third-in-line to the throne, has started school in London.

The four-year-old, accompanied by his father Prince William, arrived for his first day at Thomas’s Battersea school.

His pregnant mother Kate was absent because she is suffering severe morning sickness.

A nervous-looking George, wearing a school uniform of dark shorts and a navy jumper with red trim, held his father’s hand as the Head of Lower School, Helen Haslem, escorted the royal duo to his classroom.

His mother Kate missed the occasion due to acute morning sickness and has cancelled other engagements this week after the palace announced on Monday that she was expecting her third child.