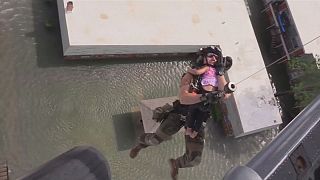 The storm, one of the costliest to hit the United States, has displaced more than 1 million people, with 50 feared dead from flooding that paralyzed Houston, swelled river levels to record highs and knocked out the drinking water supply in Beaumont, Texas, a city of 120,000 people.

The Trump administration in a letter to Congress asked for a $7.85 billion appropriation for response and initial recovery efforts. White House homeland security adviser Tom Bossert told reporters on Thursday aid funding requests would come in stages as more became known about the impact of the storm.

Trump plans a second visit to the region on Saturday. Though the sun was out in Houston on Friday and water levels down in many areas, Mayor Sylvester Turner called for voluntary evacuations on the city’s west side. He said already-flooded neighborhoods there may be in greater danger as the Army Corps of Engineers continues to release water into the adjacent Buffalo Bayou to prevent dam and levee failures.