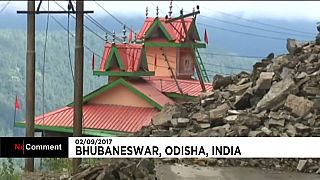 Updated: 02/09/2017
<p>Heavy rains on Saturday, (September 2), caused severe flooding in India’s eastern state of Odisha, bringing life in the province to a grinding halt.</p> <p>Rainfall in Bhubaneswar has flooded roads and railway tracks, submerging and damaged hundreds of houses. Local residents said the continuous rainfall has brought the province on its knees.</p> <p>“Bhubaneswar is a smart city, it is the number one smart city, but you can see the scenario over here that it’s full of water, and it is very tough. For if there is any medical emergency, if there is anything which is very urgent we can’t get out of our homes,” said local man Ramesh.</p> <p>In the eastern city of Shimla a massive landslide swept away vehicles and damaged buildings, including a temple. A police officer said there were no casualties and people were evacuated from the area.</p> <p><blockquote class="twitter-video" data-lang="fr"><p lang="fr" dir="ltr"><a href="https://twitter.com/hashtag/Shimla?src=hash">#Shimla</a> landslide <a href="https://twitter.com/hashtag/Himachal?src=hash">#Himachal</a> <br /> Dangerous Landslide <a href="https://t.co/n6FFnZK7KY">pic.twitter.com/n6FFnZK7KY</a></p>— Ravi Rana <span class="caps">BJP</span> (@raviranabjp) <a href="https://twitter.com/raviranabjp/status/903996119969144833">2 septembre 2017</a></blockquote><br /> <script async src="//platform.twitter.com/widgets.js" charset="utf-8"></script></p> <p>“As per the rescue work done until now, there has been no loss of life. According to safety protocols, three houses have been evacuated and people have been warned as debris is crashing off onto the road continuously. It has fallen twice already. To avoid any mishap, we have evacuated people,” said Shimla police Deputy Superintendent Rajinder Sharma.</p> <p>Flooding is an annual problem during the monsoon season in South Asia, but the impact has been worsened by crumbling civic infrastructure, clogged drains and uncontrolled urban expansion.</p>
no comment