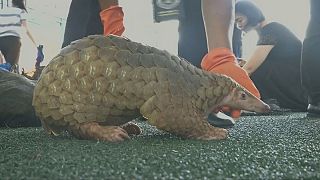 Officials seize over 100 pangolins in Thailand

Thai customs officials said on Thursday they have seized more than 100 live pangolins and 450 kilogrammes of scales from the endangered animal.

Customs Department Director-General Kulit Sombatsiri said the illicit wildlife material was seized on Wednesday from two pick-up trucks after authorities received a tip-off they had been smuggled in from Malaysia.

Pangolin scales are in demand for traditional Chinese medicine because they contain keratin, a protein also found in rhino horn. Pangolin meat is considered a delicacy in Vietnam and some parts of China.

A UN wildlife conference last year approved a ban on trade in all eight species of Asian and African pangolins. Kulit said his department has seized more than 2.9 tons of pangolin-related items this year worth more than 29 million baht (870,000 US dollars).

Authorities also showed 6 pieces of ivory found coming into the country via postal mail on August 22. They are believed to be worth around 7,000 US Dollars.

The rescued pangolins will be sent to an animal sanctuary outside Bangkok.