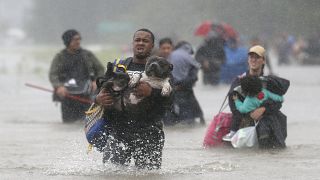 A community comes together as more rain dumps on Texas

Torrential rains continue to pour in Houston, Texas flooding roads, rivers, and homes. Thousands of people have taken to the streets to escape the surging water. Houston is facing some of the worst floods in years. As the trail of Tropical Storm Harvey dumps more rain on the city, swelling rivers to record levels, federal engineers have been forced to release water from area reservoirs in hopes of controlling the rushing currents. Harvey, the most powerful hurricane to strike Texas in more than 50 years, first hit land late on Friday. Schools, airports and office buildings in the nation’s fourth largest city are closed. Chest-high water has filled neighborhoods in the low-lying city that is home to about 2.3 million people.

With an offering to Pachamama (Mother Earth), the ancestral Inca ceremony for the Sun god or Inti Raymi, was staged in Cusco.