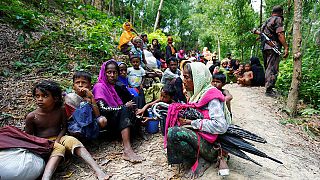 Some 1,000 ethnic Rohingya Muslims from Myanmar, under fire from soldiers there, forced their way into Bangladesh on Monday.

An estimated 5,000 people have crossed the border into Bangladesh in the past few days, according to Rohingya refugees in camps in the border district of Cox’s Bazar.

The fighting – triggered by coordinated attacks on Friday (August 25), by insurgents wielding sticks, knives and crude bombs on 30 police posts and an army base – has killed 104 people and led to the flight of large numbers of Muslim Rohingya and Buddhist civilians from the northern part of Rakhine state.

The violence marks a dramatic escalation of a conflict that has simmered since October, when a similar but much smaller series of Rohingya attacks on security posts prompted a brutal military response dogged by allegations of rights abuses.

The treatment of about 1.1 million Muslim Rohingya in mainly Buddhist Myanmar has emerged as the biggest challenge for national leader Aung San Suu Kyi, who has condemned the attacks and commended the security forces.

The Nobel peace laureate has been accused by some Western critics of not speaking out on behalf of the long-persecuted minority, and of defending the army’s sweep after the October attacks.

The Rohingya are denied citizenship in Myanmar and classified as illegal immigrants, despite claiming roots there that go back centuries, with communities marginalised and occasionally subjected to communal violence.

Rohingya have been fleeing Myanmar since the early 1990s and there are now about 400,000 in Bangladesh, which has said no new refugees will be allowed in.