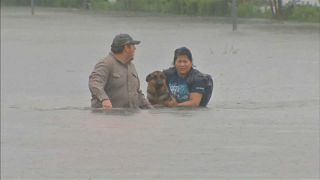 Dramatic footage is emerging from Texas showing scores of people, many carrying pets in their arms, attempting to escape surging floodwaters.

Houston is facing worsening floods in the coming days as the trail of Tropical Storm Harvey dumps more rain on the city, swelling rivers to record levels and forcing federal engineers to release water from area reservoirs in hopes of controlling the rushing currents.

Harvey, the most powerful hurricane to strike Texas in more than 50 years, first hit land late on Friday and has killed at least two people.

It has since lingered around Texas’ Gulf Coast, where it is forecast to remain for several more days, drenching parts of the region with a year’s worth of rain in the
span of a week.

Schools, airports and office buildings in the nation’s fourth largest city were ordered shut on Monday as scores of roads turned into rivers and chest-high water filled
neighborhoods in the low-lying city that is home to about 2.3 million people.

Torrential rain also hit areas more than 150 miles (240 km) away, swelling rivers upstream and causing a surge that was heading toward the Houston area, where numerous rivers and
streams already have been breached.